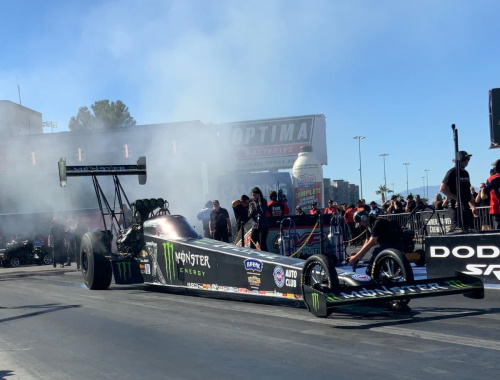 Force and her David Grubnic and Mac Savage-led Monster Energy team’s first chore is to earn enough bonus points during qualifying to reduce the lead. Force can do that by qualifying No. 1 for the 13th time this season, which would tie the single season Top Fuel record set by Tony Schumacher in 2006 and the John Force Racing team record set by John Force in 1996. Once she cuts her deficit, it would force Torrence to at least win his first-round race. Not out of the realm of possibility since Pomona is the only track on the circuit at which Torrence lost in the first round this year (August Winternationals).

“We head into the final race of the 2021 season in Pomona this next weekend. I’m ready to get Friday qualifying started and get this weekend going. We are currently No. 2 in points, 105 behind Steve Torrence. We still have a shot at getting to the top, but that team needs to be defeated in the first round and we need to win the event,” Force said. “It’s Pomona, my home track and I’ve seen crazier things happen with teams pulling off a championship at the very end. Our team did it in 2017 and we’re going after it again. One race, one weekend and we’re giving it everything we got.”

In 2017, Force clinched her first championship title in a perfect weekend. After securing the No. 1 qualifying position, her first at the Auto Club Finals, Force would win the championship over Torrence by defeating Richie Crampton in the second round after Torrence had already lost. Force would then go on to win the event for the first time in her career. A repeat of 2017 could be exactly what Force and the Monster Energy / Flav-R-Pac team need to secure their second Top Fuel world championship.

Their battle for the 2021 NHRA Camping World Drag Racing Series Top Fuel championship at the Auto Club NHRA Finals at Auto Club Raceway at Pomona begins with qualifying Friday at 4 p.m. and continues Saturday with two sessions at 12:30 and 3 p.m. Eliminations will begin Sunday at 10 a.m. Television coverage of the championship battle will all be on Sunday with a qualifying show at 2 p.m. ET and finals show following at 4 p.m. ET on FOX Sports 1 (FS1).