At the 2021 NHRA Camping World Series season finale, Capps and Hagan will be vying to capture DSR’s 19th series championship trophy, and seventh Funny Car title. The No. 1 and 2 ranked drivers are no stranger to duking it out on the track, as both have been jockeying for the top-seeded Countdown to the Championship position throughout the first six of seven playoff events with Capps occupying the points lead after the conclusion of three races (Charlotte 2, Bristol, Las Vegas 2), and Hagan standing strong on top of the leaderboard after St. Louis and Dallas. In fact, the only playoff event where a DSR driver didn’t occupy the No. 1 position after the race weekend was the first Countdown race in Reading, Penn.

Capps, the 2016 Funny Car world champion, enters the NHRA Finals with two wins, three runner-up finishes, and four No. 1 qualifiers on the season. While on paper two wins might not seem like an exorbitant number, the Dean ‘Guido’ Antonelli/John Medlen-led NAPA team are arguably the most consistent in the ultra-competitive class which has seen 10 different event winners this year. Capps and the NAPA team have advanced to the semifinals or beyond at 11 of the first 19 events, and have set off the win light 35 times– both category-best achievements.

“It’s been so fun getting to know this new NAPA AUTO PARTS team. We were teamed up over the off-season and it’s been such a great year,” said Capps, referring to the decision to pair him with the longtime DSR co-crew chief tandem of Antonelli and Medlen and their crew after former NAPA crew chief Rahn Tobler announced his retirement in late January.

“We’ve qualified well throughout the year, and have been consistently strong all season and now here we are, running for a championship. ‘Guido’ and Medlen, and our NAPA AutoCare team, we came together quickly like a duck to water at the beginning of the season, and it just felt like a natural fit. They’ve gotten to know me, and our last race in Vegas was a perfect example of how well we all work together, because, as much pressure as there was on race day, especially with all of the other top Countdown cars going out early, they really knew how to loosen me up and keep me in the right frame of mind. They’ve certainly helped me and my driving throughout the year. The big key for us this weekend is just to continue what we’ve been doing.”

Hagan, the three-time and reigning world champion, is also quick to credit his crew chief, Dickie Venables, and all of the hard work the Direct Connection crew has put in all year in order to place them in a solid position to go back-to-back with championship hardware. Among their list of impressive performances was the way they were able to quickly adapt to a last-minute driver swap when Hagan tested positive for COVID-19 ahead of the U.S. Nationals and former DSR shoe Tommy Johnson Jr. was tasked with assuming the wheelman duties in Hagan’s absence. Johnson’s victory in Reading, the first Countdown event, was recorded as one of the team’s four 2021 wins and helped to kick off their championship-defense campaign. In addition to their category-best four triumphs, the Direct Connection Dodge team notched three runner-up finishes, three No. 1 qualifiers, and 32 round wins.

The NHRA Finals feature a unique points-and-a-half format where each elimination round win is worth 30 points, top-four qualifying runs are awarded bonus points, and additional points are granted based on qualifying order. There are a maximum of 187 markers up for grabs, and while there are endless scenarios, Hagan would need to go at least two rounds further than Capps to lock up a back-to-back championship.

“We’re heading into Pomona fighting for a championship and I’ve been on both sides of this battle,” says Hagan, who has raced for the Funny Car crown as either leader or challenger heading into the season finale on seven occasions and won three (2011, 2014 and 2020). “My first championship, I just had to show up and go two rounds to be crowned a champion, similar to what Ron has to do. Last year, we were going into the last race two rounds ahead and this year, we’re going in two rounds behind, so, it’s nothing new for us, but I think we have to be super aggressive rolling into qualifying and get some valuable points. The game plan is just really run hard, run smart and be aggressive. We’ve got nothing to lose. This is Ron’s to lose honestly, and ours to win.”

Hagan relishes the fact that he remains in contention for his fourth Funny Car title, particularly after he suffered a pair of very uncharacteristic consecutive first-round exits from the last two playoff events. Both he and his Mopar Dodge//SRT crew are motivated by the opportunity to rebound from that setback and make an aggressive final sprint for the Wally and championship trophy.

“We’ve had two bad races in a row in the Countdown and that’s been a big hit,” says Hagan, who is on track to score his 11th Top 10 finish. “It’s unfortunate but we’ve just got to bounce back. I’m very aggressive about it. Dickie is going to be aggressive. I’m going in there full steam ahead. I’m pumped up. I’m ready to go and fired up about it. I want to go race and that’s what we’re going to do.”

While Capps will assuredly wrap up this season in the top-five for the 15th time in his career, his focus remains on the ultimate goal. Considering his 58-point lead to start the weekend and a record of scoring qualifying bonus points at all but four events this year, he appears to be in a good spot heading into Auto Club Raceway at Pomona, his hometown track, where he returns as the most recent event winner after securing the hardware at the rescheduled NHRA Winternationals in July. While Capps is happy to have the points lead, he is quick not to get ahead of himself, especially with the presence of an additional threat, fellow Dodge Funny Car driver Cruz Pedregon, who utilizes a DSR-prepared chassis and is holding down third place, sitting 83 points out of first.

“I feel like I’ve been hardened a bit with these past experiences of coming to Pomona numerous times with a really good chance to win a world championship, and have come very close but then ended up falling short several times,” said Capps a 27-year nitro veteran, who finished as ‘the bridesmaid’ four times (1998, 2000, 2005, 2012) before finally capturing his first Funny Car title in 2016. He went on to finish as the runner-up for the fifth time in his career the following year.

“I don’t know what else you could say to try and pump up this showdown in Pomona. Matt’s right there nipping at our heels, Cruz is definitely still in it; it’s going to be a fight ‘til the end” he added. “Having a small points-lead coming into the weekend and having the opportunity to battle it out again, and with this weekend’s points-and-a-half format, it makes it even more exciting. Even coming into the weekend sitting in second or third, you feel like you have a great chance. But, of course, I certainly prefer to be in the position I’m in now where I’m leading.” 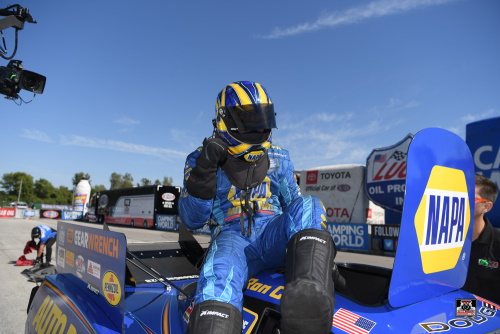 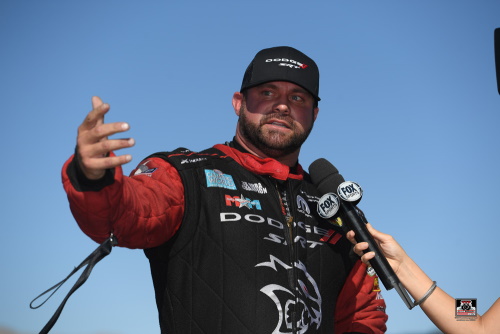 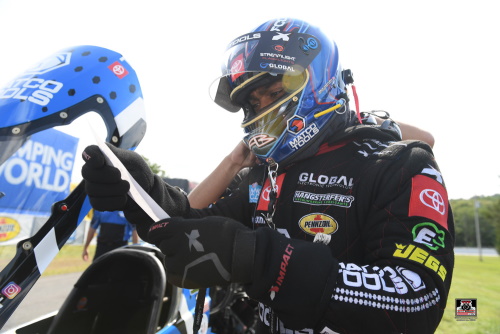 Quotable:
“I’m looking forward to the NHRA Finals in Pomona and ending the year on a good note. All of our Matco Tools distributors have been great supporters all year, and we want to go out there and represent. We’re ready to step on the gas and close out the year by putting our Matco Tools dragster in the winner’s circle.” 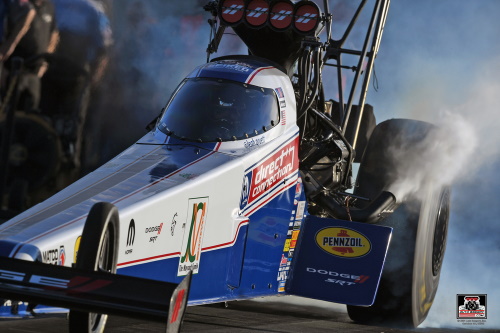 Quotable:
“For those not inside the nucleus of the championship hunt, this final race really reveals what kind of warrior you are. You’re either one that gives up in the last bit of the marathon or the one that charges to the end with a surprising spirit. I know this is a fighting team that is pushing and striking every which way we can to the final round of the final season of our final race with DSR. That is who we are and how we will finish out this season in the Direct Connection Top Fuel Dragster.

“There are some years I think, ‘man, we deserved to finish higher’ and just fell short at the end. This weekend, having our eyes on the No. 5 finisher spot would be a direct reflection of our performance overall. There is no blaming the Countdown or made-up excuses. We have not been the highest-performing team this season, but we have been the most relentless. A top-five finish for the fifth consecutive year would be a good ending to an intensely grateful run with DSR.”