POMONA, Calif. (November 11, 2021) – The highly competitive team of Robert Hight and his Automobile Club of Southern California Chevrolet Camaro SS crew are heading to the Auto Club NHRA Finals at Auto Club Raceway at Pomona with one goal in mind, winning the last race of the 2021 NHRA Camping World Drag Racing Series season. 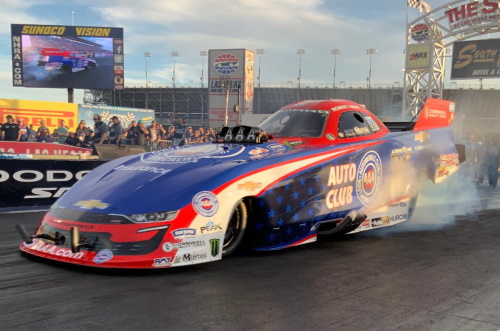 Hight and his Auto Club team are coming off back-to-back semifinal appearances at Bristol Dragway and most recently at The Strip at Las Vegas Motor Speedway. The Auto Club Chevy team have earned two No. 1 qualifying positions this season including a No. 1 that earned them an extra $15,000 at the Texas Motorplex’s Stampede of Speed at the NHRA FallNationals. In addition to two No. 1s, the Auto Club Chevy has two victories in 2021 at the SpringNationals in Houston and Sonoma Raceway’s NHRA Sonoma Nationals as well as two runner-up finishes at the season opening Gatornationals and the New England Nationals.

“It’s been an inconsistent season for this Auto Club team. I’m hoping that the progress we’ve made towards the end here will continue into next year,” Hight said. “We’ve worked hard, and, in some places, it’s paid off. There’s been some mistakes, but we’ve worked as a team to overcome them. Now it’s about going out there and finishing the year off with a bang and having some fun while doing it.”

Hight has won once at the Finals (2007) but has five total wins at Auto Club Raceway and has been runner-up on five other occasions. He went to the final round the last time he raced in the Auto Club Finals (2019), clinching his third championship in the process. This will be Hight’s last opportunity to extend his longest active Funny Car Countdown winning streak to four consecutive years and last chance to break a tie with Matt Hagan for most overall Countdown Funny Car victories (they both have 12).

“Auto Club Raceway, the Auto Club Finals. There’s so much to be racing for at this event. It’s the end of the season, it’s my sponsor’s race at my sponsor’s racetrack and it’s home for John Force Racing,” Hight said. “All the more reason for us to come out and do well. Take it one pass at a time starting in qualifying. I can’t wait to get out there and get the weekend started.”

The Auto Club NHRA Finals at Auto Club Raceway at Pomona begins with qualifying Friday at 4 p.m. and continues Saturday with two sessions at 12:30 and 4 p.m. Eliminations are slated for Sunday at 10 a.m. Television coverage of the final event in the 2021 NHRA Camping World Series season will be on Sunday with a qualifying show at 2 p.m. ET and finals show following at 4 p.m. ET on FOX Sports 1 (FS1).