Capps heads into the Auto Club NHRA Finals as the No. 2 qualifier after securing his spot by driving his NAPA AUTO PARTS Dodge Charger SRT Hellcat to a 3.908-second/ 329.83 mph run, the second quickest of the first session. He collected three bonus points for that effort, then added another four by posting the quickest time in the second session to help extend his lead over his Don Schumacher Racing (DSR) teammate Hagan to 67 points heading into Sunday’s eliminations rounds where round wins are worth 30 points.

Capps, who has taken home four Wally trophies from the Pomona Fairplex venue including the one earned this August, will begin his race day against No. 16 seed Terry Haddock and with the knowledge that he only needs to turn on two win lights on Sunday to secure his second Funny Car world championship title.

Three-time and defending series champion, Hagan is second in the Funny Car standings and heads to eliminations as the No. 7 seed after taking his Direct Connection Dodge Charger SRT Hellcat for a 3.956-second drive at 319.75 mph in the second qualifying session to add two bonus points to his total. He’ll have No. 10 seed Tony Jurado as his first round opponent and should both Hagan and Capps advance past the opening round, the DSR teammates will battle each other in the quarterfinals.

Meanwhile, Cruz Pedregon is still in the championship mix despite a 91 point deficit and eyeing his third Funny Car title after his victory at the Dodge//SRT Nationals in Las Vegas put him in contention. Pedregon qualified his Snap-On Tools Dodge Charger SRT Hellcat sixth on the eliminations ladder with consistent qualifying runs that put him fourth on the timing sheets in the first two sessions and provided and two extra points for his efforts. Pedregon will have No. 11 seed Tim Wilkerson in the lane next to him for the opening round match up.p.

While a plethora of scenarios are possible, one thing is certain: a Dodge Charger SRT Hellcat will be crowned a Funny Car World Champion for the sixth time in 10 seasons. What makes the anticipation heading into the final showdown that much more thrilling is that any one of the three drivers could win it.

• To defend his Funny Car crown, Hagan has to drive his Direct Connection Dodge Charger SRT Hellcat to the final round or, in the event Capps advances past the first round, to the winner’s circle.

• For Cruz Pedregon to win his third career NHRA championship, he will have to turn on four win lights and Capps will need to lose the opening round.

Having earned the Top Fuel Wally trophy at the rescheduled August Winternationals at Pomona, DSR pilot Leah Pruett’s mindset heading into this weekend has been on repeating that feat to end the season on a high note. She put herself in a good position to do that with steady improvement through qualifying, recording the third-quickest pass of the second session and second-quickest run in the final session, a 3.706 second lap at 327.59 mph. That qualifying effort was rewarded with five bonus points and put her Direct Connection dragster in the No. 3 position on the eliminations ladder. Pruett will begin her race day with lane choice over No. 14 seed Cameron Ferre.

Qualifying highlights will air on FS1 on Sunday, Nov. 14, from 2-4 p.m. ET followed by coverage of the elimination rounds from the Auto Club NHRA Finals, including live coverage of the final round, from 4-7 p.m. ET to close out the 2021 NHRA Camping World Series season. 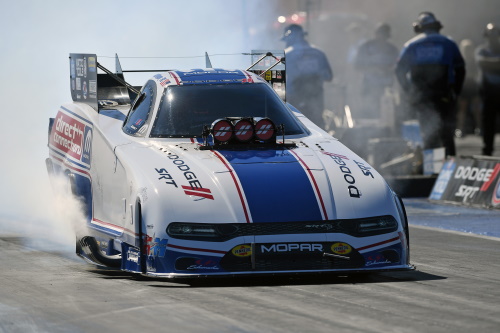 “It’s about as simple as it gets. We have to win the race. If we want to win the championship, we have to win the race. If we do that, we’ve done what we set out to do here and all year long. I don’t know how it worked out that way, but the good lord above shined on us today and gave us a shot to make our own fate. It all falls on us. I know we have the car, team and people to do this and I’m excited to have a shot. Ron Capps and that team are great, but we’re going to try and ruin their day. That’s what we do out here when we race and let’s see how it plays out tomorrow.” 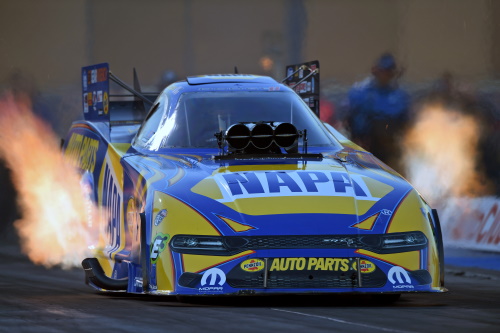 “We always talk about these goals that we have with this NAPA AutoCare team and we saw how crazy qualifying was. Our first goal is always to qualify because you’re not guaranteed to race on Sunday in NHRA drag racing. There are no provisionals. We accomplished that right off the bat on Friday in Q1. Secondly, we wanted to gain some of those important small bonus points and put it over the 60-point threshold with (Matt) Hagan. It’s a nice cushion. That’s a hole nother round that they’d have to win to go around us. We want to wake up tomorrow morning with the though of winning the race and it will take care of itself. We saw what happened in (Las) Vegas and anything can happen in NHRA drag racing. The goal is to win the race. We have Terry Haddock first round and we’re focused on that and that alone. If things line up second round against Hagan, then we’ll focus on that. Waking up Sunday morning in November at Pomona with a chance to win a world championship is something I’ve done a lot. We did it in 2016, but I’ve been here a lot where we didn’t accomplish the goal. And that’s made me better in the seat as a driver. I’m just focused on the same thing and that’s drive this great NAPA Dodge that Guido (Dean Antonelli) and this AutoCare team has given me.” 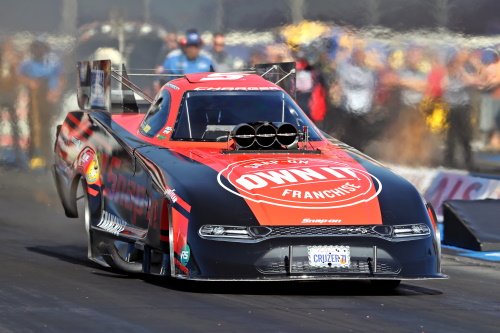 “The Snap-on Tools Dodge Charger SRT Hellcat was very consistent through qualifying and I’m very happy about that. We tried to push the limits in the last session to try to get up higher in the field and we were on pace to run second or third quickest in the session, but the car drifted out of the groove on me and I made the choice to shut it off. What’s going to help us win the race and championship is just to take care of our business on our side of the ladder.

We had a great car that was consistent in the heat, so we’ll take that information and apply it on race day. The exciting part about this is nobody knows what’s going to happen. I think we’re going to have a good race. I feel confident that we are ready for what comes and that we will have a good race.” 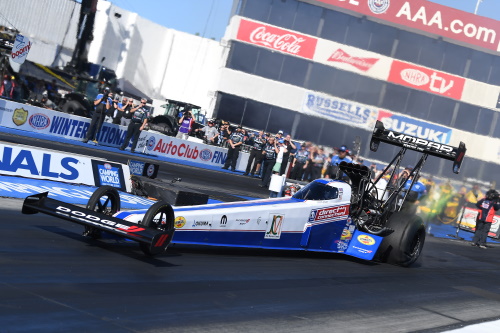 “We started out in Q1 on Friday with the barrel fully loaded and we just missed it. We knew we needed a solid run on Q2, and we did that with a beautiful 3.75 pass in the heat of the day and that gave this Direct Connection team all the confidence for Q3 to step up with that great 3.70 for the No. 3 spot. (Crew chiefs) Todd (Okuhara) and Neal (Strausbaugh) are tuning with a great amount of confidence and I’m looking forward to the final race of the season to be the culmination for this team. We want to shove this Dodge//SRT dragster into the winner’s circle tomorrow like we did here in July.”

Mopar
Mopar (a simple contraction of the words MOtor and PARts) offers exceptional service, parts and customer care. Born in 1937 as the name of a line of antifreeze products, the Mopar brand has evolved over more than 80 years to represent both complete vehicle care and authentic performance for owners and enthusiasts worldwide.