POMONA, CA (November 15, 2021) – As the 2021 NHRA Camping World Drag Racing season wrapped up today at Auto Club Raceway at Pomona second-year driver and team owner Justin Ashley was looking to pick up his second win of the season. The 2020 NHRA Rookie of the Year powered the Vita C Shot Top Fuel dragster to the No. 12 qualifying position heading into race day. Through two days of qualifying Ashley made three runs with his quickest effort, 3.765 seconds at 320.97 mph, was the fourth quickest run of the second session and solidified his spot in the field. A very tight Top Fuel field stacked up the Winternationals finalist against three-time Top Fuel champion Antron Brown in the opening round.

drew a tough first round opponent,” said Ashley, who raced to two final rounds in the Countdown. “Antron has been very supportive to me throughout my career.”

In the first round both 11,000 horsepower Top Fuel dragsters launched hard off the starting line. They were side by side the entire way down the 1,000-foot racetrack. At the finish line Brown’s Top Fuel dragster was just able to push the nose of his racecar out in front to get the win light. Ashley made his quickest run of the weekend, a strong 3.713 second pass at 329.42 mph but it wasn’t enough to advance to the quarterfinals. 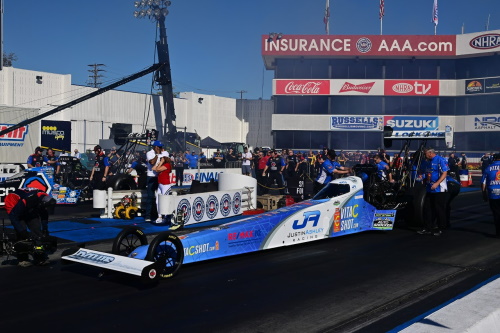 “At the end of the day that is definitely not the way we wanted to end the season,” said Ashley. “I have to tip my cap to Antron and his team. They did a great job. They outperformed us that time. It was a good race. Nine times out of ten our combination would have been good enough to win the round. It was just a close race, you learn from it and move on.”

Ashley’s season included a final round at the Winternationals in July and a final round to start the Countdown in Reading, Pennsylvania. His breakout win at Texas Motorplex’s Fall National moved him into the championship discussion. Two semifinal finishes at Bristol and Las Vegas moved the team solidly into the top of the class during the Countdown.

“You can look back and think about missed opportunities,” said Ashley. “For us as a young group, especially when the Countdown started, suddenly the rate of growth and maturation just sky-rocketed for us. We are focused on the long-term growth of this team. Last year we established a foundation and this year we really took a major leap forward. I think this year has set us up for many years of success to come.”