POMONA, CA (November 15, 2021) – Veteran driver, crew chief and team owner Tim Wilkerson came into the Auto Club NHRA Finals with one goal. The two-time Funny Car winner in 2021 wanted to put on a great show for the fans and finish the season on a high note in the Levi, Ray & Shoup Summit Ford Mustang Funny Car.

Through two days of qualifying Wilkerson crept up on a consistent tune-up in unseasonably warm temperatures for Southern California. In the final session Wilkerson got a hold of a positive move and ran 3.990 seconds at 316.23 mph. It was not a standout run but it was enough of an improvement to give the experienced driver and crew chief something to work with on race day. 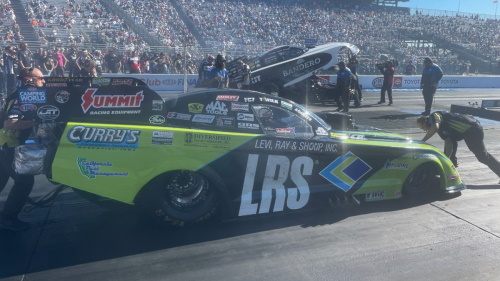 “We struggled in qualifying for sure,” said Wilkerson. “The track was hot and we didn’t get everything we wanted to out of it. I kept at it and Richard (Hartman) and I talked. I made some adjustments for Saturday night, and it improved like I hoped it would. I felt confident coming into the first round even though we didn’t have lane choice.”

Racing Cruz Pedregon in the first round Wilkerson had the chance to insert himself in the outcome for the 2021 Funny Car championship. Pedregon needed to win the race to have a shot at his third championship. The race was decided at the starting line when Wilkerson took a starting line advantage with his .053 to .070 reaction time. His LRS Summit Mustang Funny Car stayed hooked up the entire way down track and the scoreboard lit up with a winning 3.922 second run at 325.58 mph. It was Wilkerson’s strongest run of the event and advanced him to the quarterfinals against No. 3 qualifier Alexis DeJoria.

“I was confident we would make an even better run than our last run in qualifying,” said Wilkerson. “I knew conditions would be better and I could see from that last run there was more to work with. I was happy with that 3.92 and glad we got that win.”

In the quarterfinals once again Wilkerson took a starting line advantage and his Mustang Funny Car was right beside DeJoria as each 11,000 horsepower racecar blasted down the track. As they approached the finish line Wilkerson’s Funny Car lost traction and DeJoria drove around him at the finish line. The loss of traction robbed Wilkerson of the momentum needed to advance to the semifinals.

“We knew we needed to be aggressive against Alexis but I also was looking at what the track would hold,” said Wilkerson. “We just got a little over center on that run and it cost us. We got a couple wins this season and I have to thank Dick Levi as well as everyone at Summit Racing Equipment. We wanted to finish with a win, but we gave it our all.”