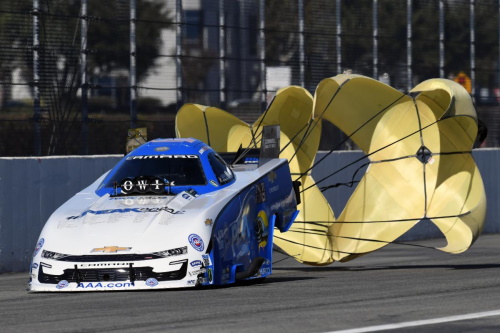 POMONA, Calif. (November 15, 2021) – John Force and the PEAK Antifreeze and Coolant #PEAKSquad Chevrolet Camaro SS team made a semifinal appearance at the Auto Club NHRA Finals at Auto Club Raceway at Pomona. Robert Hight with the Automobile Club of Southern California Chevy Camaro and Brittany Force with the Monster Energy / Flav-R-Pac dragster both had first round exits.

John Force and the PEAK Chevy team started race day from the No. 5 position after some engine woes in the final qualifying session. The #PEAKSquad Camaro found consistency on raceday starting with a first round victory against Chad Green. Force would lay down a 3.938-second pass at 329.75 mph bettering Green’s 3.986 at 319.37. In the second round Force would have a clean run at 4.038-seconds at 313.37 mph to defeat Paul Lee’s 6.593 at 98.59. 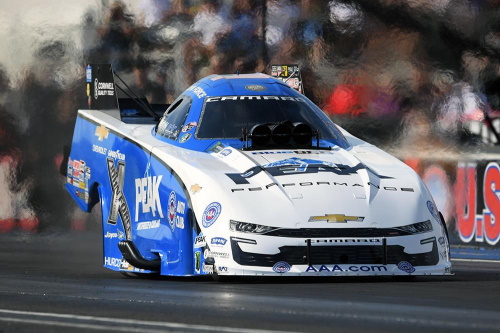 The semifinal round put Force against long-time rival and eventual event winner Bob Tasca III. Force would come up short with a 3.982-second pass at 323.58 mph as Tasca is able to drive around him with his 3.950 at 322.58.

“Just want to say congratulations to Ron Capps, Dean Antonelli, John Medlen and Don Schumacher. Wish we could have won it, but we didn’t. Brittany coming in second, we’re happy with that and congratulations to Torrence,” said Force who finishes the season fifth in the standings. “I’ve got a lot of work to do in the off season to keep myself in the hunt next year. Robert got fast this weekend, my car, we’re building on it. I’m excited.” 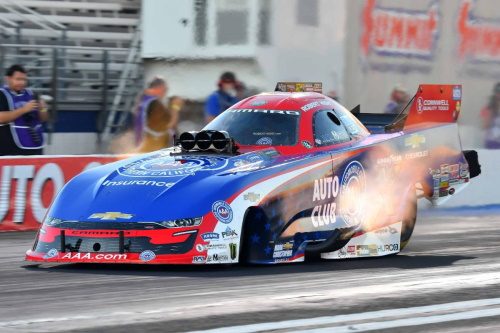 Entering the day from the No. 1 qualifying position, Robert Hight and the Auto Club Chevy team had an exciting first round race against Jim Campbell. Both Funny Cars smoked the tires forcing a pedal fest to the finish line. Unfortunately, Hight and his Camaro didn’t have quite enough to win the round going 6.034-seconds at 253.56 mph to Campbell’s 5.403 at 184.57. Hight will finish the 2021 season in the eighth position for the third time in his career.

“It’s been a tough season for this Auto Club Chevy team. We really wanted to come out here to Auto Club Raceway at the Auto Club NHRA Finals in front of the bosses and finish on a good note,” said Hight who will end the season eighth in the standings. “Unfortunately, that didn’t happen. We found some consistency and had that No. 1 qualifying position just wasn’t our day today. I’m looking forward to next season. We don’t want to be in this situation again. We want to be in contention.” 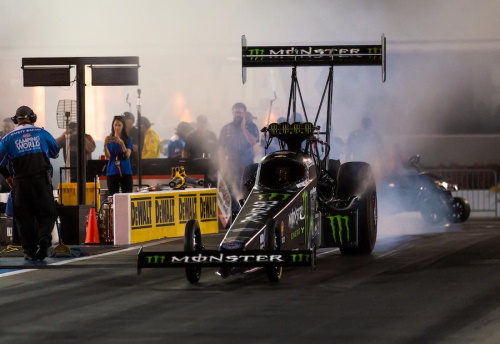 When Brittany Force pulled the Monster Energy / Flav-R-Pac dragster up to the starting line for the first round, her championship chances had just been taken with Steve Torrence winning his first round and clinching his fourth consecutive championship. The David Grubnic and Mac Savage tuned dragster would run into trouble early in the left lane. The tire smoke that plagued the Monster Energy team in qualifying emerged again causing Force to coast to 10.704-seconds and 74.05 mph. Billy Torrence would get the win with a 3.730 at 328.30.

“Overall, it’s been a great season for the Monster Energy / Flav-R-Pac team. We doubled up, we won in Topeka with my dad, and we were in the hunt for a championship. A lot of teams wish they could be in our position,” said Force who earned a second place finish. “We were able to battle it out, but I will say congratulations to the Capco team and Steve Torrence. They did an amazing job. We’ll be back here shortly, and I can’t wait to chase him down and start all over again.”

The John Force Racing team’s will enjoy the off season and the holidays before picking back up for the 2022 NHRA Camping World Drag Racing Series season with the Lucas Oil Winternationals right back at Auto Club Raceway at Pomona, February 17-20.