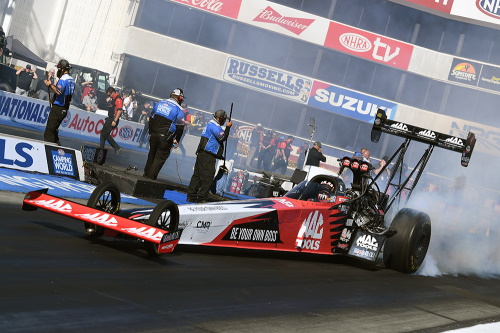 Doug Kalitta Closes Season with Quarterfinal Finish at Pomona
Veteran Doug Kalitta and the Mac Tools Top Fuel dragster team were looking to close out their 20th season together with a win at the Auto Club NHRA Finals. Through two days of qualifying on Friday and Saturday Kalitta rolled into race day as the No. 10 qualifier and a first round race with rookie Josh Hart. Kalitta’s best qualifying effort of 3.757 seconds at 321.65 mph had the 49-time winner ready for race day.

Facing one of the rising stars in the sport Kalitta and his team rose to the occasion in the opening session. Both dragsters left together but it was Kalitta who had the run to win hitting the finish line stripe with a winning time of 3.709 seconds at 327.66 mph. Kalitta was out in front for most of the race and took the win to advance to the quarterfinals

In the quarterfinals Kalitta matched up with Steve Torrence looking to advance to his third semifinal of the season. Kalitta and the Mac Tools dragster launched off the starting line and was charging down his lane when just past half-track his dragster lost traction. Kalitta regained control almost immediately and was working to chase down Torrence who also had a traction issue. He was unable to get his second win light of the day and closed the NHRA Finals with a quarterfinal finish.

“The first round win was a good win for this team and we were on our way in the second round,” said Kalitta. “This has been a challenging Countdown but we never gave up. This Mac Tools team gave it their all every race and today it just didn’t go our way.”

Kalitta will finish the season in the Top Ten for the 24th consecutive year. 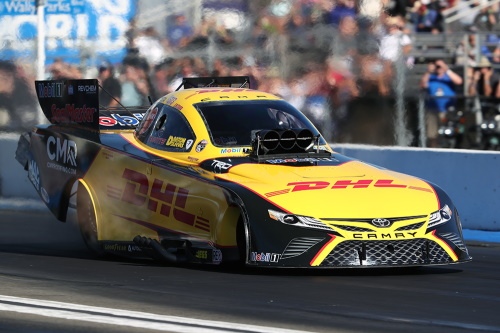 J.R. Todd and DHL Toyota Camry Wrap up 2021 With Top Ten Finish
On the day the brand new Toyota GR Supra Funny Car was announced for the 2022 NHRA season 2018 NHRA Funny Car champion J.R. Todd was racing his DHL Toyota Camry Funny Car for the last time. On Saturday Todd powered his Funny Car to the No. 8 qualifying position on the strength of his final qualifying run which was the fourth quickest of the session and set him up for success on race day. Todd opened the season with a win at the Gatornationals and grabbed three additional runner-up finishes.

In the first round today racing veteran driver Bob Tasca III Todd had lane choice and rolled into the right lane. The last time Todd raced at Auto Club Raceway at Pomona he raced to the final round. It was the July edition of the Winternationals and Todd took three win lights from the No. 7 qualifying position. This morning in the first round Todd and Tasca left the starting line together and Todd was pulling away for victory as the race cars crossed half-track when his DHL Toyota lost traction. Todd tried to pedal his 11,000 horsepower Funny Car he was unable to reel in Tasca.

“We gave it a good ride in the first round but it was just a little too much,” said Todd. “Drag racing is unforgiving and we just came up short on that run. We were in a lot of finals this season and got that win at the Gatornationals. We are going to take all the positives from today and this season into the off-season. I can’t wait to bring that GR Supra to the Winternationals.” 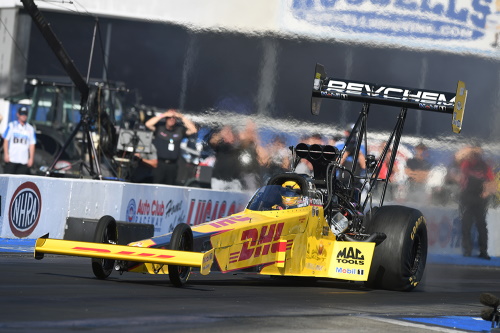 DHL Kalitta Air Top Fuel Dragster and Shawn Langdon End Season in Pomona
Shawn Langdon was hunting his third win at the NHRA Finals driving his DHL Kalitta Air Top Fuel dragster. In 2015 and during his Top Fuel championship season of 2013 Langdon closed out the season with a win at the fabled Auto Club Raceway at Pomona. This year the Gatornationals finalist was looking to close out the season with one final win. Langdon has also made two runner-up appearances and was No. 1 qualifier in 2012.

This weekend Langdon powered the DHL Top Fuel dragster to the top half of the qualified field entering race day as the No. 8 qualifier. His best run of qualifying was a solid 3.746 second pass at 324.83 mph. In the first round be matched up with Tripp Tatum in a very tight No. 8 versus No. 9 race.

Langdon took a dominant starting line advantage leaving with a .041 reaction time against Tatum’s .090 but as the dragsters closed in on the finish line Langdon’s dragster hazed the tires while Tatum was making an unblemished 3.704 second pass.

“This was a tough way to end the season but I have to thank DHL and Kalitta Air for all their support,” said Langdon. “No one on this team ever gave up. We are going to get back to work after a little time off and be ready for 2022.”

This season Langdon posted several quarterfinal and semifinal finishes and will finish the season No. 9 in Top Fuel points.