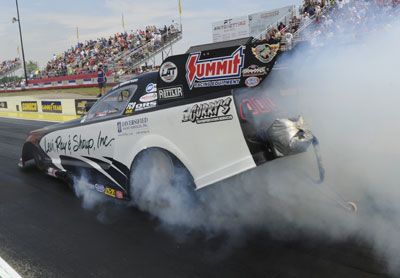 Tim Wilkerson is currently in a much more enviable position than he has been in previous seasons when it comes to qualifying for the NHRA Mello Yello Drag Racing Series Countdown to the Championship.

However, the popular Funny Car driver is not about to relax heading into the final leg of the three-week Western Swing. Sitting in eighth place in the points standings in his 10,000-horsepower Levi, Ray & Shoup Ford Shelby Mustang, Wilkerson already has one win and has qualified for the NHRA Traxxas Nitro Shootout.

But a victory at this weekend’s 28th annual NHRA Northwest Nationals at scenic Pacific Raceways, a facility where he has posted three wins, would go a long way in cementing his spot in the Countdown to the Championship. 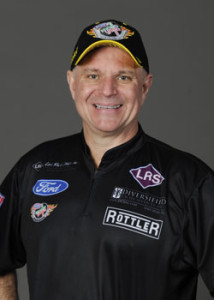 “There’s never anything comfortable about racing in the Funny Car class because the next run can completely throw you off your approach or cost you a lot of money,” Wilkerson said. “We’re not perfect, and if we had a little better luck a few times this year, we’d be in an even better position. But I prefer where we are now over those years where we went into Indy needing about eight different things to happen in order to make it. We’ve pulled off a few last-minute miracles to get into the Countdown in the past, so having a chance to just earn a spot normally is better. We just have to do it.”

Doug Kalitta (Top Fuel), John Force (Funny Car), and Jason Line (Pro Stock) were last year’s winners of the race that will again be televised on ESPN2. Serving as the only major American motorsport that visits the region each racing season, it is the 16th of 24 events in 2015, meaning just two races follow it before the Countdown to the Championship begins.

Wilkerson holds a 103-point lead over 11th-place Courtney Force, giving him a good cushion but by no means making him comfortable. Instead, Wilkerson would like to jump up further, something he is certainly capable of considering how well his car has performed for most of the season.

Wilkerson, who has 18 career wins, lost in the first round in Sonoma a week ago, but he feels like his car has the potential for more heading into a key stretch. He is just 40 points out of seventh place and believes he is just a few tweaks away from putting it all together.

“We won’t change anything heading into the Countdown,” Wilkerson said. “We still have to earn a spot, so you can’t get too aggressive and outside your normal routine, but at the same time, we have the chance to move up a couple of spots, too, so we’ll just focus on racing as fast as we can, lap by lap. Where we end up won’t be based on us trying to do too much or too little because we’re trying to treat each lap like we always do. It will end up wherever it ends up.”

Being locked in heading to Seattle will be important as well since it wraps up the grueling Western Swing. Having been through this stretch repeatedly throughout his standout career, Wilkerson knows how to approach the final race of this rigorous stretch.

“In my case, it’s the owner and the tuner and the driver trying to make sure we finish strong,” Wilkerson, who broke a long winless streak with a victory in Atlanta this year. “I’m not sure a hired driver can do much to keep his crew fresh other than taking them out to dinner. But I can make sure they stay focused and get some rest because the Western Swing covers so much ground in such a short amount of time, it’s hard to not be worn out before it’s over. We get a week off after Seattle, so we can all be worn out then. The key is to get through Seattle like it’s all that matters.”

That approach has led to a good amount of success in Seattle, but Wilkerson will be tested this weekend in the always-loaded Funny Car class. John Force’s Funny Car win last season marked his eighth victory at Pacific Raceways, more than double the next Funny Car competitor. Force already has two wins in 2015 but will face off against a talented host of standouts, including red-hot Jack Beckman, who will try to sweep the Western Swing in his record-setting Infinite Hero Foundation Dodge Charger R/T after racing to convincing victories in Denver and Sonoma.

Wilkerson will also contend with the likes of points leader and defending world champion Matt Hagan, Ron Capps, Tommy Johnson Jr., Cruz Pedregon, Robert Hight, Alexis DeJoria, and Del Worsham, but Wilkerson knows he has a car that can win at Pacific Raceways.

“There’s definitely something special about Seattle, but it’s hard to put a finger on it,” Wilkerson said. “It’s a low-key place, and that suits me, but I think it’s just a track where the conditions often play into our hands. There’s usually a qualifying run or two where you can get after it, and it’s important to do that, but on Sunday in the middle of the day, you have to have the ability to be on the edge without stepping over it. You can’t just go for the home run every round, or you’ll strike out in a hurry. Over the years, we’ve been able to find the edge and stay on the good side of it, and with all the good runs we’ve made in Seattle, we have a lot of data to work with.”

As always, fans will have the opportunity to interact with their favorite drivers as they’re granted an exclusive pit pass to the most powerful and sensory-filled motorsports attraction on the planet. This unique opportunity in motorsports gives fans direct access to the teams, allowing them to see firsthand the highly skilled mechanics service their hot rods between rounds, and get autographs from their favorite NHRA drivers.