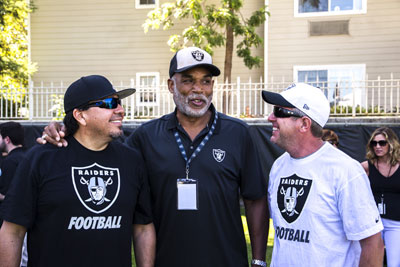 NAPA, Calif. – Funny Car drivers Cruz Pedregon and Tommy Johnson Jr. are fierce competitors on the dragstrip but they share a love for the game of football off the track.

After an intense weekend of competition at the NHRA Sonoma Nationals in Sonoma, Calif., the two drivers stepped away from the dragstrip and onto the football field to watch the Oakland Raiders practice at their training camp facility in Napa Valley this past Monday.

“I’ve had my fill of nitro,” Pedregon, driver of the Snap-on Tools Toyota Camry, said upon arriving at Raiders’ facility. “Now I’m ready to smell the grass.”

“I can see why people love Funny Car racing,” Chester, who won Super Bowl XV with the Raiders in 1980, said. “If you haven’t felt that, if you haven’t experienced that, whatever you do, you haven’t experienced anything like it. It’s a totally unique experience. They fire those cars up and all of your organs just start to shake. It shocked the heck out of me; and here’s the worst part, I started to like that feeling!” 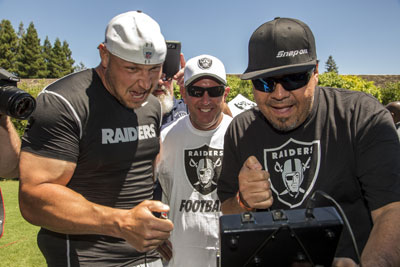 After practice, Raiders’ Pro Bowl kicker Sebastian Janikowski, long snapper Jon Condo and punter Marquette King competed against Pedregon and Johnson Jr. on a Christmas tree reaction time simulator to test their best reaction times of the bunch. The drivers had an advantage over the players, but after a few tries the Raiders gave them a run for their money.

Condo had the best reaction time of the group, notching a .008-second reaction to the tree, but King forced Pedregon and Johnson to really step up their game, posting trees in the .013-.019 range multiple times.

“That’s awesome,” Pedregon said. “Marquette’s on it. I can tell he has the rhythm going.”

Reacting to the Christmas tree and getting off the starting line quickly can be the difference between winning and losing a race in NHRA Mello Yello Drag Racing, especially in the 10,000 horsepower, nitro-burning Funny Car category. In a fast paced sport like football, reaction times are just as vital as they are in racing and can mean a play made, or a play missed.

“Reaction time is critical because of everything (going on) out there,” Condo said. “You have to know your plays and you have no time to think. It’s important when you’re out here practicing to get all the reps so when it’s game time you can just go off of your reactions. So it’s critical.” 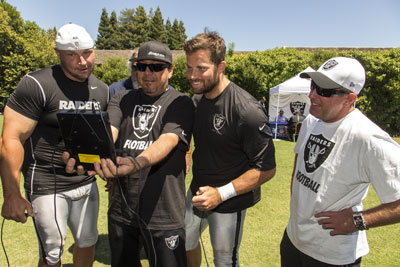 The NHRA Mello Yello Drag Racing Series heads to Pacific Raceway in Seattle this weekend, Aug. 7-9, for the NHRA Northwest Nationals, the 16th of 24 events of the season. Mello Yello Drag Racing Series qualifying begins Friday, Aug. 7, with sessions at 2:30 and 5:30 p.m. The final two qualifying sessions will take place Saturday, Aug. 8, at 1 and 4 p.m. Final eliminations are scheduled for 11 a.m. on Sunday, Aug. 9.