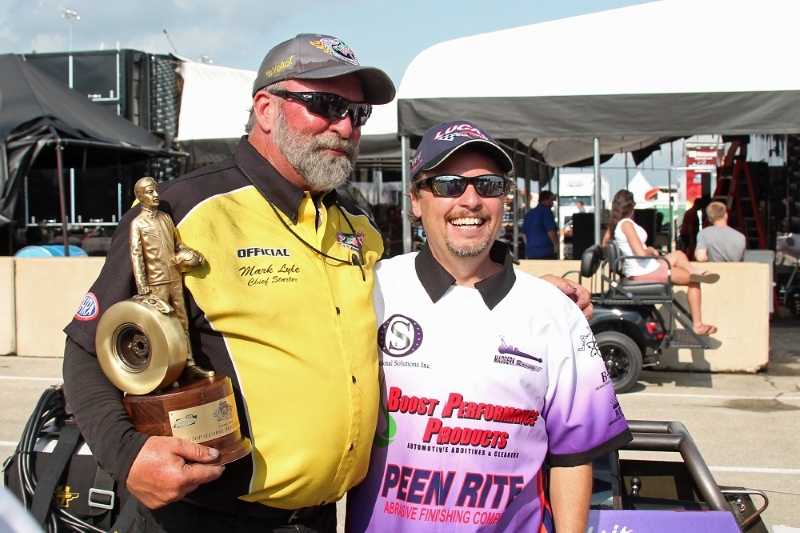 LAS VEGAS (March 31, 2016) – Like everyone else in the NHRA community, Top Alcohol Dragster pilot Chris Demke enters this weekend’s Denso Spark Plugs NHRA Nationals with a heavy heart after the unexpected loss of friend and NHRA Chief Starter Mark Lyle earlier this week. Demke and his Maddern Racing team will race this weekend in Lyle’s memory.

“Lyle and our team go way back. We knew him back when he was the Division 6 starter. We hung out with him on and off the track. We were really excited when he was promoted to NHRA Chief Starter. He was one of the good guys. He did his job and he did it very well. You could always trust Mark to tell you what was going on. He would have the track properly prepared. He will be sadly missed. Such a tragedy and a surprise. Lyle was the man,” Demke said of his late friend.

Traditionally a track that gives the West Coast blown alcohol dragster team some trouble, The Strip at Las Vegas Motor Speedway is where the Peen Rite/Boost Performance Products team will find themselves for the next two weekends. Despite his spotty past at The Strip, Demke feels confident this time around after qualifying No. 1 and reaching the final round at the Phoenix regional event last month.

“Las Vegas is one of the best facilities on the west coast. It’s not a track we usually do well at, but we have our moments. There are four races at this track per year – two nationals and two regionals – and we won the spring regional last April. It’s challenging, but it’s a great track surface. It’s at a moderate elevation so we need to adjust our tune-up. If our Phoenix tune-up transfers to Vegas then I have very high expectations as far as what we’re capable of.

“We did better than we expected [at Phoenix], but we can’t get cocky heading into this race. We need to maintain that process that we put together and carry that through to Las Vegas. We had some good luck at Phoenix, but a good part of the success was performance driven. We ran our team best at that altitude. That altitude is similar to what we’ll see at Las Vegas. We have the ability to run career-best Las Vegas numbers this weekend,” Demke predicted.

Top Alcohol Dragster qualifying at the Denso Spark Plugs NHRA Nationals, April 1-3, begins on Friday with sessions at 12:15 and 4 PM. Final qualifying is set for 11:15 AM Saturday, followed by first round of eliminations at 2:30 PM. Eliminations continue on Sunday afternoon.