PITTSBORO, N.C. (August 4, 2015): Derrick Beach, a beloved PDRA and NHRA announcer, has just stepped up in his role with the PDRA, taking a position as Senior Vice President of Marketing. Beach joined the PDRA as a commentator for the 2015 season, working alongside veteran announcer Brian Olson. It quickly became evident that Beach was not being used to the fullness of his potential. The Ohio native is working toward a degree in accounting and sports marketing from Ohio State University and has cut his teeth in his own Beach Marketing Solutions company. Now Beach is ready to use his expertise in branding and promoting the world’s quickest and fastest eighth mile drag racing organization. 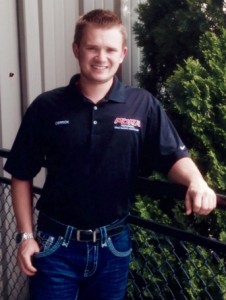 “The PDRA has a really good brand,” stated Beach, who is excited about his new role and helping to promote an organization he’s already passionate about. “It’s the fastest eighth mile drag racing series in the world. So there’s nothing else like what we’re doing. We’re the only family-based organization in drag racing. We can relate to every single person that comes through the gate because they are families, and they bring their family to the race track. Our organization is run by families. So we have a pretty unique brand to market.”

Beach capitalizes on his youthful excitement and energy, matching it with wisdom beyond his years to formulate his approach to PDRA marketing. At the top of his list is building brand awareness for the budding organization.

“First of all, we have to build brand awareness. We also want to make it more of an interactive fan experience for the fans that come to our events. I want to do something during the downtime between third and fourth rounds. I’m going to create a kid zone of some type at certain events. Sitting in the stands for seven or eight hours is such a long time, especially for moms and dads with young ones. Getting them out and moving around where they can burn off some energy is good. So we want to work on fan interaction. Social media is big. We’re going to work on that. We’re also going to take a look at ticket distribution in all the markets we go to. The overall goal is to get the PDRA to where it should be, and that is sold out crowds at every race.

“I’m thinking about doing block parties,” he added. “We would have cars on display and live music and activities. Not only does it bring business to the local town, but it draws attention to the PDRA and our event that weekend. We go to some of the same markets that NHRA goes to and there’s no doubt in my mind we can’t get some of the same results that NHRA gets at their national events in the same markets. We want to improve our relationships with the chambers of commerce, cities, and towns in the markets we go to, as well.”
Beach also plans to build upon the PDRA’s impressive online TV following to create a more substantial social media presence, something that is vital to any successful marketing strategy today.

“In today’s world, it doesn’t matter if you’re 10 years old or 50 something years old, everything is run by social media, by phones and tablets, the whole deal. So we have to really look at who we’re marketing to, the demographics and age groups we’re trying to appeal to. It goes back to ramping up our social media presence. We’re going to get on Instagram. We’re going to get on Twitter. We already have a Facebook page, but we’re going to improve that. We’re doing really good on Motor Mania TV, but that doesn’t put people in the stands. Even though it’s live and it’s really great and we’ve set records, we’ve got to have a bigger social media presence on each and every market we go into.

Beach has been watching promoting and marketing techniques since his Junior Dragster days and, growing up in Ohio, he’s had the opportunity to take notes from one of the best: “From a promoter and sports marketing standpoint, Bill Bader up at Summit Motorsports Park really, really has a good handle on marketing any drag race. It doesn’t matter what it is, from a bracket race to a national event to his Night Under Fire show, he really understands it. They take the same approach I’m going to take which is customer service is number one. We’re there for each and every racer. We’re there for each and every spectator that walks through the gate. We’re not going to sell ourselves short of that. Customer service is going to be number one at PDRA.”

While building the overall PDRA brand is important, Beach and the PDRA recognize that building driver awareness is also a large part of creating a loyal fan following. The organization prides itself on being ‘by racers, for racers’ and the entire PDRA family, from owners, to staff to racers and crew, are committed to building the organization and ensuring its staying power in the industry.

“The nitrous wars this year have been really big,” Beach said, pointing to the importance of driver branding. “The match race at Maryland between Stevie Fast and Travis Harvey was big. I think people came to watch just that run, because it was a rivalry. There was a lot of smack talking, per se, going on before the match race. We really built it up on the internet. We need more of that. We’re going to start seeing more of those rivalries played up. We’re going to build the big match ups in qualifying or eliminations, and hit on those stories to build up the drivers. We’re also going to look at introducing the drivers a little bit differently and create more driver interaction with the crowd. Instead of PDRA employees always going out and shooting t-shirts, we let the drivers shoot them. Or, we shoot driver t-shirts into the crowd.

“There’s no doubt in my mind we are going to grow,” he emphasized. “The PDRA is going to be the premier drag racing organization. I know there’s been some pessimism going around with a couple of the owners pulling out, but that hasn’t stopped their game or their plan for growing this organization. Jason and Tommy are 110% in. We’re here to stay.”