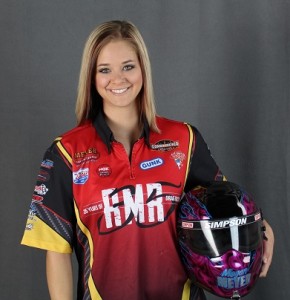 ST. LOUIS (August 6, 2015) – After three years of class-specific training, Megan Meyer is finally set to make her NHRA Top Alcohol Dragster competition debut at the St. Louis regional race this weekend. The 22-year-old college student has grown up in the sport and is now following in the footsteps of her father, veteran A/Fuel driver/tuner/owner Randy Meyer. Considering her experience and the world championship-caliber crew behind her, Meyer is poised to make a positive impression on the class.

“Although I am very stoked for my debut in Top Alcohol Dragster, I am also confident I will do well at my first race. It’s not my first time in the car, or in a race. I’ve been drag racing for over 10 years with a Junior Dragster and Super Comp car, and for the past three years I have been training for my first A/Fuel race. I am not scared or nervous of lining up against the defending drivers. I have grown up around everyone who races in the field and I know them all very well. I admire them, and I hope they respect me in return because I am not going to go easy on these guys. I plan to be just as competitive. I may be a rookie in Top Alcohol, but I am a veteran at drag racing,” Meyer noted.

Megan will drive a 2015 Chase Copeland-built A/Fuel dragster that has been prepared by the Randy Meyer Racing crew. Her father’s longtime crew member, Ted Lake, will serve as crew chief on the car. Randy, who is currently fifth in NHRA Lucas Oil Series national points, will tune his own car as well as Megan’s.

“Even though this car is brand-new from Copeland Fabrications, and has around 20-30 runs total, it’s already been driven by four different drivers, including myself. I am very comfortable in the car and I trust the entire Randy Meyer Racing crew. At the last race in Chicago, the car laid down a 5.28 elapsed time at 267 mph with Bill Litton driving. I have broke into the 5.20’s before, and I’m excited to set a new career best with this new car!”

Megan is more than just a driver, so she has been working alongside the RMR crew to prepare the car and herself for the debut weekend. Meyer worked in the shop to help catch up from back-to-back races in Norwalk and Chicago, and spent time in the office as the team’s marketing and communications director.

“Leading up to this weekend has been a roller-coaster of events. Dad and I worked together with help from crew guys Brandon and Kevin to get both cars refreshed. We also worked on the spare motors, and changed some parts around to hopefully have a better tune-up and make some of the quickest runs out there. We’ve also been fixing the little things here and there to get everything in place.

“And of course, I get my daily workout sessions in. I focus more on heavy lifting to help build muscles in my shoulders, arms, and legs to help me be a better pilot for the injected-nitro machine, and I always immediately use my post-workout Herbalife 24 Rebuild Strength to recover quickly. I want to do everything I can to prepare myself to be the best driver possible,” added Meyer, a Kansas native.

Top Alcohol Dragster qualifying at the St. Louis NHRA Lucas Oil Series regional event, August 7-8, will take place on Friday with sessions at 6 and 9 PM. Eliminations at the Gateway Motorsports Park event will begin at 6 PM on Saturday night.

ABOUT MEGAN MEYER
No stranger to a life in the fast lane, Megan Meyer grew up around the sport of drag racing. In 2004, at just 10 years of age, she was given the opportunity to get behind the wheel of a Junior Dragster, alongside her younger sister, and took over the driving duties with no hesitations. Megan stepped up to the Super Comp class in 2010 after a successful career in the Junior Drag Racing League, earning two track championships.*She is now making the transition to Top Alcohol Dragster with her father and veteran driver Randy Meyer as her mentor and driving coach. Follow Megan on Facebook (www.facebook.com/meganmeyer.racing), Twitter (www.twitter.com/meyersisters), and Instagram (www.instagram.com/meganmeyer.racing).

ABOUT RANDY MEYER RACING
A highly respected member of the NHRA Drag Racing family, Randy Meyer has had a successful career spanning over 35 years of drag racing as driver, team owner, and crew chief from AHRA Pro-Comp to IHRA Top Fuel and NHRA Top Alcohol Dragster. Focusing on the things that brought the team to existence has been the reason that Randy Meyer Racing has been so successful.*In 2002 he handed the driving duties over to Gary Ormsby Jr. to become the first Top Alcohol Dragster to run in the teens with a solid 5.135 ET. The following year, Meyer tuned Alan Bradshaw to become the NHRA Top Alcohol Dragster World Champion. Randy has returned to the driver’s seat since then, and has earned multiple Lucas Oil Drag Racing Series Division 5 and Central Region points championships. For more information on Randy Meyer Racing, please visit www.RandyMeyerRacing.com and like RMR on Facebook (www.facebook.com/randymeyerracing). 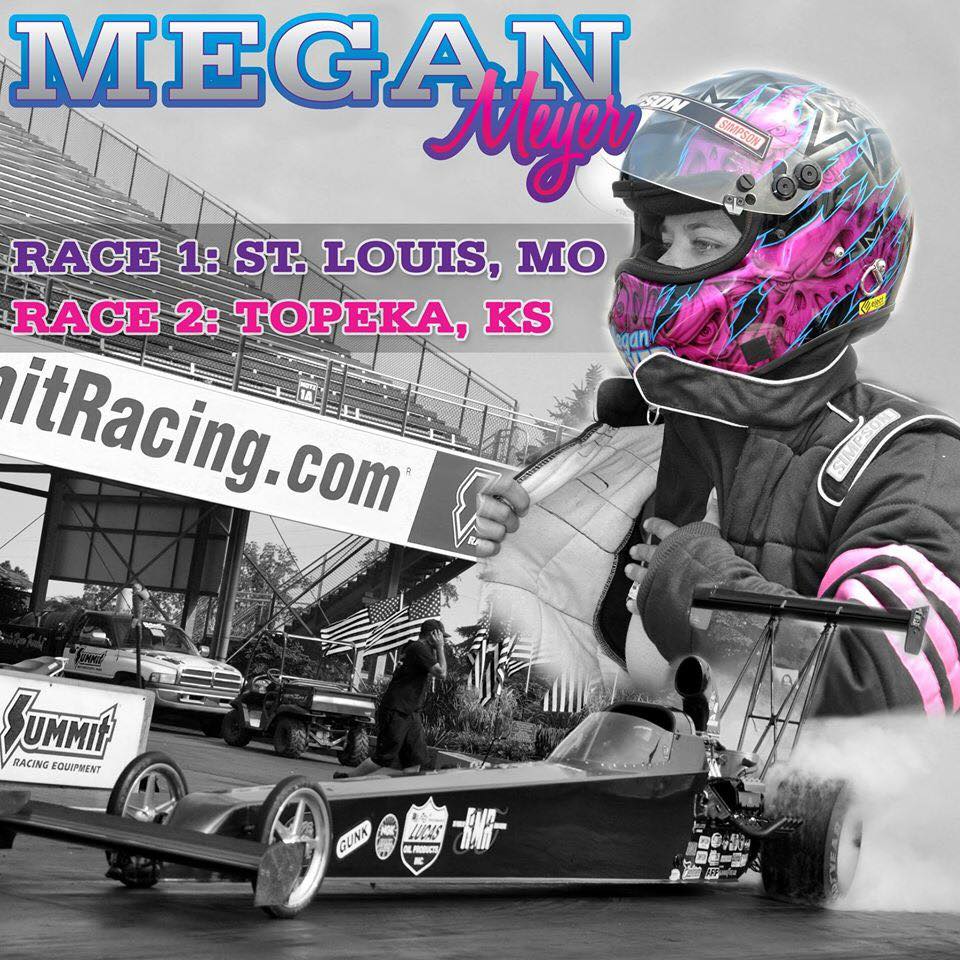