TOLEDO, Ohio (May 12, 2016) – When teenager Parker Kligerman showed up on the entry list for the first time in 2008, few people in the ARCA community knew who he was. A year later, Kligerman had the attention of the entire racing world after the Westport, Connecticut rookie won nine of 21 ARCA Racing Series presented by Menards races over one of the most memorable championship battles in series history. 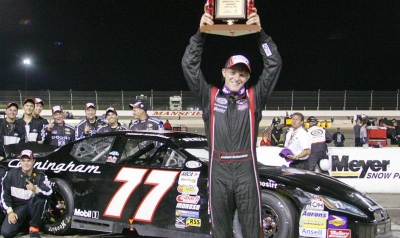 Kligerman will be returning to the scene where it all started, entering the upcoming May 28 ARCA 150 presented by Unique Pretzels at New Jersey Motorsports Park (NJMP). Kligerman is entered in the No. 22 Cunningham Motorsports Dodge, the same team that introduced him at the same track in 2008.

“This is definitely a homecoming for me,” Kligerman said. “Just coming back with Cunningham Motorsports is huge. New Jersey was the first place I ever drove a stock car. It’s been a long path since then, but I’m just grateful for this opportunity with Cunningham again…Kerry Scherer and Briggs Cunningham having the faith in me to bring me back. I can’t wait.”

After debuting in ’08, Kligerman made big news on the ARCA tour in 2009, earning the SCOTT Rookie of the Year title and getting as close to a championship as one can get over here.

Despite winning the season finale at Rockingham Speedway, he got edged out of the national title by just five points by Justin Lofton, whose last lap pass for position at Rockingham ensured Lofton’s championship. Part of the difference could be attributed to qualifying points, which at the time paid 15 for the pole, 10 for second and five for third. Since then, series officials backed off on qualifying points, now awarding just five points to the polesitter only. Kligerman clearly out-performed Lofton in race events, but Lofton consistently out-qualified Kligerman, which, in the end, may have been the difference. Kligerman had nary a pole to Lofton’s season-high five…that’s 75 points in itself. Kligerman lost the title by five.

“I never let it bother me,” Kligerman said regarding the championship. “I could never really pinpoint any one thing. If I would have qualified better for sure, but if we hadn’t gotten wrecked at Pocono, or if we hadn’t gotten beat at New Jersey…one of the coolest last lap battles I’ve ever had anywhere. We had two chances to win at New Jersey, one we got beat for rain and the other we got beat on the last lap. I’m ready to go back and put it on ’em and win that thing.”

Kligerman got everyone’s attention right off the bat in his maiden voyage at NJMP in ’08, qualifying second. After making a pit stop in the back half of the race, Kligerman was noticeably charging to the front when rain halted the race for good 19 laps shy of the finish. Kligerman was credited with the sixth finishing position. 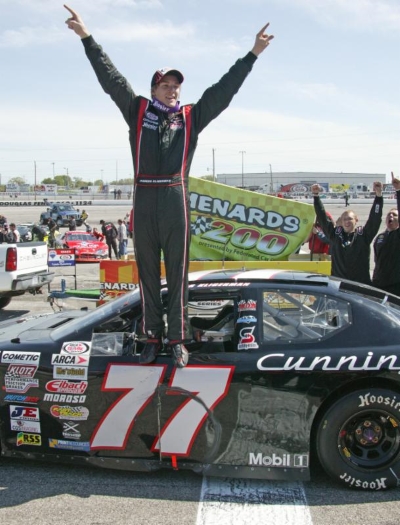 Kligerman returned full-time with Cunningham Motorsports in 2009 in the No. 77 Dodge. With four consecutive top-10s to start the year at Daytona, Salem, Rockingham and Talladega, Kligerman slipped at Kentucky, spun and went two laps down, ultimately finishing 17th. It was the last time Kligerman bobbled, answering with his career-first ARCA win in the Menards 200 at Toledo the very next week.

Kligerman’s Toledo victory set the stage for one of the tour’s most remarkable rookie runs in history when the newcomer set sail with wins at Michigan, Mansfield, Iowa and Kentucky consecutively. Lofton answered Kligerman with back-to-back wins at Berlin and Pocono before Kligerman got back on the victory track at the Illinois State Fairgrounds and DuQuoin State Fairgrounds dirt miles. Kligerman had never been to a dirt track, let alone raced on one. After slapping the wall at DuQuoin in qualifying, Kligerman started last, in 34th position. It didn’t matter. By lap 55, he was in the lead and drove away from Frank Kimmel to win the Southern Illinois 100.

“That was the most surprising thing in my whole career (winning both dirt races). I joke about it now. I never raced on the dirt but I’m perfect on it…two for two.

“But that’s what makes ARCA so great…going from the speedways to the short tracks, from the dirt tracks to the road courses. If ever a driver would feel complete in winning a championship, it’s in ARCA. It’s an awesome series.” 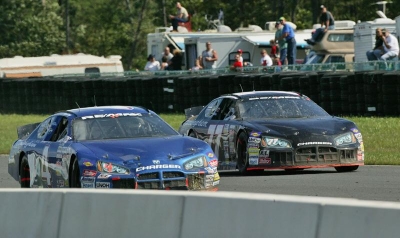 The tour went from DuQuoin to New Jersey in September of ’09 where Kligerman found himself dueling eventual winner Patrick Long on the final circuit. It was a thrilling last lap charge from Kligerman during which Kligerman and Long bounced off each other, sending Kligerman dirt-tracking off course. Kligerman steered his car right back on course without missing a beat, settling for the second finishing position at the final stripe.

After New Jersey, Kligerman finished second at Salem and wrapped up the season with back-to-back wins at Kansas and Rockingham, ending the most successful rookie seasons ever.

Overall, Kligerman raced in just 23 ARCA races, earning 14 top-five finishes, 20 top-10s and winning a tick shy of 40% of every race he entered. If qualifying wasn’t his forte, leading races most certainly was, as he led 725 laps in 15 races.

“Looking forward to seeing all you guys at New Jersey. We’ve got some unfinished business there.”

Weekend Schedule
Practice for the ARCA 150 presented by Unique Pretzels is scheduled in two sessions Saturday, May 28. The first practice is from 10:15 – 11:00 a.m. followed by final practice from 11:15 to 12 noon. Menards Pole Qualifying presented by Ansell (group qualifying) is scheduled at 2:00 p.m. Saturday. The ARCA 150 is set to get underway Saturday afternoon at 5:00 p.m.

All ARCA Racing Series on-track activities at NJMP will be featured in live timing and scoring, live audio and live chat at arcaracing.com.